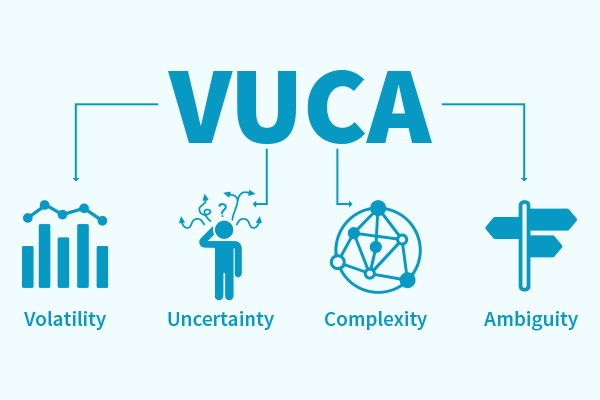 Leadership in a VUCA World

VUCA has been a common acronym in use for over two decades. It is often referred by leaders to explain what they otherwise struggle to and also to create a sense of urgency and productive paranoia.

It describes the world around as turning increasingly Volatile, Uncertain, Complex and Ambiguous.

In good old days, periodic directions and reviews with occasional innovations were enough to run businesses. Not anymore.

While the VUCA landscape has been creating challenges for businesses, it is becoming even more challenging for those in leadership roles. Just reporting the weather to those looking up to you isn’t good enough.

I have often found myself struggling with breaking patterns and difficult forecasts in a changing environment. Overnight, products are becoming irrelevant, models obsolete and there have been more black swans flying around then I ever thought there could be!

However, these are the times when leadership is more important than it ever could be. Creating and handling large teams is demanding. VUCA environment further adds to the woes by increasing the stress and anxiety levels of teams. This often leads to a drop in usual productivity levels and an increase in workplace gossip.

There are some clear asks from leaders to navigate the teams through such choppy times effectively:

A clear sense of destination and direction is what teams look up to the leader for and that is what the primary role of the leader remains, though even more accentuated in a VUCA set up.

As a bank, we went through a massive transformational journey in the last nine years and I was lucky to be a good part of most of it. From core banking software to our brand to almost every product, system and process went through a complete overhaul. It created a huge amount of stress and anxiety in several minds at our branches. It required us to be at the ground and hold the teams together with the management vision and a sense of direction, as we negotiated a volatile and complex task. We had to often break down the vision to simpler and understandable short and medium-term goals for teams to understand and relate better and ensure the become a part of the journey and breed positivity. Our transformation has been unparalleled in its success at any private sector bank.

Leader’s ability to impart a simple understanding of complex surroundings and marrying it with the stated vision create the stability and certainty for teams. The rest of the things around the business matrices usually fall in place, once the leader fulfils this primary task.

When dealing with a crisis, demand on leadership boils down to common sense and simplicity.

As Dejan Stojanovic said-“The most complicated task is to be simple”.

I authorize RBL Bank and its representative to email me w.r.t. it's products and offers.

4 Reasons why you need the RBL Bank Cookies Credit Card

10 income tax rules that are effective from April 2022

The definitive guide on salary and savings accounts