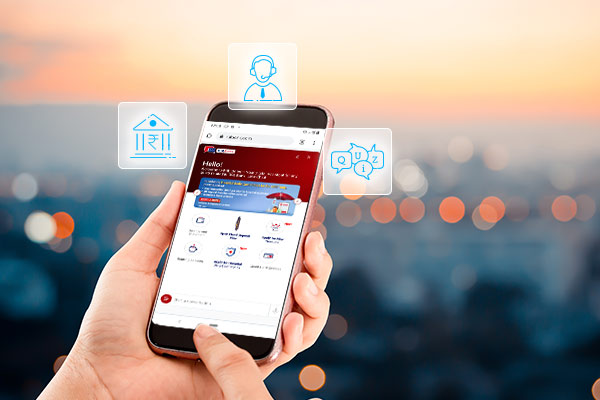 10 key things you can effortlessly do using chatbots

Chatbots have gained popularity in recent times due to the progress in the field of Artificial Intelligence, making today’s chatbots more smart, responsive, and helpful compared to their previous counterparts, and are likely to have a larger impact in the near future. Hence, organizations are becoming increasingly aware of its potential to boost business growth.

A chatbot is a software designed to simulate conversations with humans in a natural manner using text or voice.

They can be majorly of two types. Firstly, virtual voice assistants which help people remember things, search for information, make purchases, etc. like Amazon’s Alexa and Apple’s Siri. Messaging apps and text-based conversational ones on the other hand are designed for businesses and brands intending to stay online 24/7 for instant resolution of customer queries.

Today, we look at 10 different ways chatbots are solving problems around us.

UNICEF, the international child advocacy nonprofit, employs chatbots to help people from developing nations speak about their most urgent needs.

U-Report, their mobile engagement platform, focuses on gathering large-scale polling data. It then disseminates the data and sends out prepared polls on a range of urgent social issues. The users can respond to these policy issues and implement the said recommendations.

Managing customer queries related to banking products & processes majorly involves attending to the same set of questions from the customers. Such routine queries might take up the customer representative’s valuable time which can be used to handle more complex activities. So why not use chatbots for the same purpose?

The RBL Bank Chatbot (RBL CARES) is a perfect example of a 24×7 AI-based banking buddy that helps you look for the right solution, checks account balance and statements, opens a term deposit, enables/disables international transactions on your cards, resets the card PIN, transfers funds and does much more. RBL Cares has more than 95% success rate since its inception in January, 2020.

The major ill effects of sleep deprivation and insomnia are that the person has this sensation of almost suffocating loneliness – the possibility that every other person on the planet is resting calmly while your own brain deceives you with stresses and questions – hence the inability to sleep properly.

To help people counter this problem, the mattress company, Casper, created a chatbot that aims to give insomniacs someone to talk to while the rest of the world rests easy. The chatbot, most aptly named Insomnobot 3000 (after the famous Iron Man line, love you 3000), acts as an entertainment companion or a late night friend. This bot is only operational between 11pm and 5am. You can say anything to it and it will reply back.

Chatbots are designed to have engaging conversations with humans. They can also lighten up your mood with fun statements, or show images while relaying important instructions and communicating with the user.

RBL Bank Chatbot (RBL Cares) efficiently applies this to create a great user experience on the bot. It provides engaging and straightforward communication along with convenience on the go. Just join a conversation with the RBL Bank Chatbot on the website.

Tracking down your transaction is usually a complicated and long process. You never seem to have that sense of ease unless you find out whether your money has reached its intended destination. The RBL Bank Chatbot (RBL CARES) is a great example of a chatbot providing instant status tracking & transacting facility round the clock.

It is hard to talk about chatbots and not mention the latest version of GPT–3. The standard for making chatbots, GPT–3 simplifies the process with its high level of creativity and grammar making it the trusted choice for numerous chatbot developers.

Founded by Elon Musk, OpenAI has been working on building a series of deep learning based language models that are known for producing human like text in numerous situations.

While GPT-2 had limitations such as a lack of logical understanding which limited its commercial use, GPT-3 solves that problem by increasing the parameter size to over a hundred times its predecessor.

A few key examples include Code Oracle (chatbot understands the code written by you and generates a completing code to solve problems that would originally take a lot of your time), Figma (takes an input URL and description, and then creates the entire website for you), and writing code for analysing datasets based on output (as showcased by Matt Schumer, CEO of OthersideAI).

Loebner prize is awarded to chatbots for their ability to have human-like conversations. The one major problem faced by chatbots is that the conversation with its users feel slow, tacky, out of place, and in most cases, non-human. The prize is awarded to the artificial intelligence computer program that is deemed the most humanlike, as determined by a judging panel up until 2019, when it was changed to an audience participation vote.

Mitsuku, nicknamed Kuki, does not serve any specific purpose, all it aims is to engage and entertain users. Kuki claims to be an 18-year-old female chatbot from Leeds, England. Her intelligence includes the ability to reason with specific objects, play games and do magic tricks at the user’s request, in excess of a quarter of a million times in a day.

The worldwide recognition of Kuki in turn opened the world to the concept of ‘chatvertising’, a concept which is used till date for the purposing of chatbots.

8. Alexa: The voice-bot with the largest revenues

Backed by Amazon’s market capitalization of $1.8 trillion in September 2020, Alexa is the most financially successful voice-bot with 100+ million units sold. She can help you shop, run polls, listen to music, or play karaoke.

We associate news with speed and this area is already conquered by a bot. The news aggregation service based in China, Toutiao or “headline news,” has over 120 million daily active users and was valued at $20 Billion in September 2017.

People struggling with Alzheimer’s disease combat dementia with short-term memory loss. They often find making routine everyday conversations a challenge. The Russian technology company Endurance made a companion chatbot for their use. It aims at identifying deviations in conversational branches that may indicate a problem with immediate recollection.

The primary function of the chatbot is to be a virtual companion. To speak with senior people on general topics: about the weather, nature, hobbies, movies, music, news, etc.

Being cloud-based provides it with the functionality to allow physicians and families to review communication logs for identifying potential memory function degradation and communicative obstacles.

Chatbots are learning from their users and are delivering far better communications. And consumers are believing in them and have trust in them for their quick replies to their queries.

I authorize RBL Bank and its representative to email me w.r.t. it's products and offers.

10 key things you can effortlessly do using chatbots

All you need to know about 'RBL Cares'